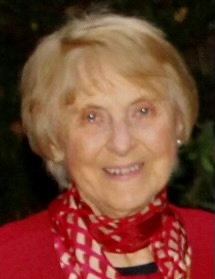 Amelia Bowden of Smithtown, New York, passed away peacefully at home on Thursday, November 10, 2022. She was predeceased by her husband, William, her brother, Frank and her parents, Philomena and Anthony. She is survived by her daughters, Cheryl (Steve), Dauretta (Craig), and Vivian as well as granddaughters, Michelle (Michael), and Colette. Most recently, and to her great joy, her family was joined by great-granddaughter Amelia.
Amelia was born in Manhattan and moved to Flushing, Queens as a teenager. There she and her brother met the boy down the street named Bill. Her brother and Bill became lifelong best friends and less than a decade later, Amelia and Bill began a romance culminating in a marriage of sixty-seven years.
The term “homemaker” in the sense of its real meaning, applied to Amelia in spades. In addition to raising three accomplished professional women (an engineer and two lawyers) and being a fabulous cook and baker, Amelia was an active member for many years of the Smithtown Book Club, one of the oldest continuous such clubs in the country, and the Smithtown Garden Club. For thirty years Amelia served on the Altar Guild at St. James Episcopal Church and was an active participant and president of the Suffolk Symphony Guild. For many years, she also served as a weekly volunteer at St. John’s Hospital in Smithtown.
A focal point of Amelia’s life was her garden. She and Bill, a horticultural educator, transformed a conventional home and yard into a cornucopia of flowering trees and plants, arranged along descending paths and terraces to their own continuing delight and the delight of their neighbors, with whom they maintained long-standing friendships. Until very recently, when ill health overtook her, Amelia could be found in her garden in all kinds of weather, weeding and planting at a pace that would have discouraged many younger folks.