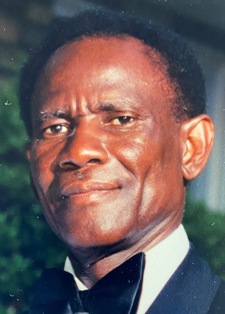 If you are not able to join in person, you are invited to click the link below to virtually join the visitation.

Antoine Jean Baptiste affectionately known as “Toto” to his family and friends was called home by his Heavenly Father and joined his ancestors on Thursday, December 03, 2020.

Toto was born on March 13, 1936, in Haiti to parents Mathilda and Ananias Jean-Baptiste. Toto grew up in Port- au-Prince where he attended primary school at L’ Institution de Notre Dame du Bon Conseille. Antoine completed secondary school at Lycee Alexandre Petion. He continued his education there until his Baccalaureate. Then to Julien Crane where he studied to become an accountant. He also earned a Diploma in Social Work. After graduating, Toto worked in Haiti. He was one of the first qualified social workers there. He later became the Director of an evening school for adults and disadvantaged children – a post he kept until he immigrated to the USA.

Toto had an overwhelming love and endearing devotion to family, and in 1965 Toto married his childhood sweetheart Michaella “Carmen” Ruban, and in 1969, they decided to leave their native country and immigrate to Brooklyn, New York. He worked several full-time jobs over the years, which led him to 35 years of service at Memorial Sloan Kettering Cancer Hospital. He worked feverishly to support his family and to help his siblings in Haiti. He worked there until his retirement in 2001.

When God created Toto, He gave him a ready wit, charm, and grace that emanated from the beautiful physical presentation with which he was endowed. As a devout Catholic, Toto loved the Lord. He believed in God’s healing power, and his love for HIM remained steadfast and unshaken. Toto was a wonderful family man, a caring son, a loving husband, a devoted brother, and an outstanding father. He cared deeply for his family and community.

Family and friends were Toto’s passion and delight. He loved to entertain, listen to music, to sing, and to dance. He won many prizes and a first one in harmonica playing competitions, organized by the Radio Carib Station, in 1953-1954. His favorite music included: meringue, ranchera, and bolero, most Cuban and Mexican music. Some of his favorite artists were Leon Dimanche, Daniel Santos, Celia Cruz of the group Sonora Matansera, and Haitian bands Tropicana and Orchestre Spetentrional. Let’s not forget POLITICS! which he would talk about endlessly. He was active in Haitian politics and a proud member of the RDNP party which he joined in 1983 and remained active in for many years. Antoine was a philosopher, a historian, an artist and a political news enthusiast at heart. He truly lived life to the fullest through simple pleasures; chatting with his friends, creating things with his hands like, customizing jewelry, designing chandeliers, making pizza, and antiquing. Toto was charming, compassionate, and a jack of all trades, and known to do anything that would make his friends and family smile.

To know Toto was to love him, and if you were fortunate enough to have met him, you would know what it meant to have a loyal friend and a confidant.  His life touched so many, and we are all affected by his sudden departure. Toto leaves a legacy of love. He was preceded in death by his wife Michaella “Carmen” Jean Baptiste. Left to cherish his memory are three daughters Lourdes Reginalde Ezell (Kenny), Natasha McSeed (Larry), Nureyev Bosquet (Fritz), and a son, Romane Jean Baptiste. His nine grandchildren, Tatianna, Brianna, Tristan, Jaden, Brielle, Nylania, Payton, Sulxana, and Noble. Toto is also survived by his companion Vierge Benjamin, his brothers Pierre, Sterne, and Hebert and his many nieces, nephews, cousins from the Jean-Baptiste, Lecoin, Metayer, and Champagne families. He will be dearly missed.