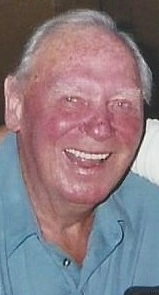 Donald Franklin Horning, 90 years young from North Fort Myers, Florida passed away December 19, 2017 in the Long Island State Veterans Home in Stony Brook, New York after a brief illness. Donald was born July 9, 1927 in Brooklyn, New York. He raised his family in Old Bethpage on Long Island.He was married to Joan Bell from January 15, 1955 until her death in 1994. Donald and his partner of over 20 years, Susan Miller, enjoyed their life in Florida playing golf, traveling and attending concerts.Don worked for over 30 years for AT&T as a Collections Manager and then spent several years at Hofstra University before fully retiring to Florida to perfect his golf game and scoring four holes in one.His hobbies included expert woodworking in which he produced a number of beautifully crafted furniture for family and friends.Donald is survived by his four children, Diane Ramirez, Elise Horning (Gail), Donald Horning (Bethany) and William Horning (Suzanne), and four grandchildren; Kristin Ramirez, Megan Ramirez, Jack Horning and Patrick Horning. He was preceded in death by his wife Joan Bell Horning; his partner, Susan Miller, his mother and father Lillian and Franklin Horning; his brother and sister in law Frank and Jean Horning.Services will take place at Calverton Cemetery on Long Island, December 29, 2017 at 11am. Arrangements were entrusted to The Branch Funeral Home of Smithtown. To sign the online guestbook or leave a condolence please go to www.branchfh.com