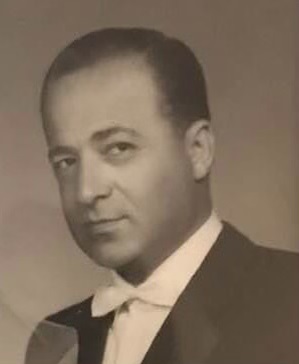 Edward Arslanian, beloved husband, father and brother, died peacefully in his sleep on April 10, 2022 at the age of 102 at his home in Smithtown, NY. Edward is survived by his loving wife of 60 years, Mary, his children Arda and John Arslanian, his grandchildren Katherine, John and Kevin Costello and his siblings Norair Arslanian and Sona Farra.

Edward was born in Aintab, Turkey and was one of nine children of his parents Ohannes and Azniv Arslanian. In 1915, his family fled Turkey during the Armenian Genocide and migrated to Syria and eventually settled in Beirut, Lebanon. As with many Armenian families who were forced to flee their homeland, resettling was difficult for his family, but Edward persevered and became a successful financier in Beirut.

Edward was a confirmed bachelor until he went to Cairo, Egypt in 1961 on vacation with his sisters and met Mary Baghdassarian, a young woman whose family had also fled during the Armenian Genocide. They fell in love, and were married a year later, on February 25, 1962 and had their children shortly thereafter.

Several years later, in July 1969, Edward and Mary moved the family to the United States, settling on Long Island where they both had family. America was his adopted home and he became a proud US citizen. Edward and Mary had a great life here and made many friends who also had immigrated to New York from other parts of the world. They had terrific outdoor parties every year with friends and family and hosted many church events as well.

Nothing made Edward happier than spending time with his family, especially his three grandchildren who, as youngsters, spent time at “Camp Grandma and Grandpa” over summer vacation. Even as they grew older, Edward remained close with his grandchildren frequently video chatting with them with on the iPhone he bought for his 100th birthday.