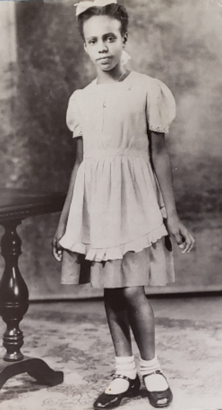 Joyce Mae Palmer May 24, 1934-April 6, 2020 Joyce Palmer leaves the legacy of her love, giving spirit, style and laughter: Joyce Mae Palmer was born in Kingston, Jamaica on May 24, 1934 to Mr. Edgerton Davis and Mrs. Ethel (Powell) Davis at Kingston Jubilee Hospital. Joyce was raised in Western Kingston. She travelled to the United States at nine years old. She was raised in New York City by her aunts, Aunt Lil and Aunt Mae, where she learned the discipline of hard work, property ownership, an exquisite lifestyle, and the skills of being an entrepreneur. As a young adult, she returned home to Jamaica, where she started her own family and went to beauty school. She became a hair stylist and sold perfumes and fine pieces in “the market.” She met her husband, Alvin George Palmer in Jamaica in 1960. Both driven, they traveled to New York in 1968. She began working at Bergdorf Goodman into the 1970’s. Making sure her family and her community had the finest things became a symbol of who she was. She later became a multi-property owner at a time when real estate ownership was not popular among women or minorities. She developed businesses at flea markets in Brooklyn and Long Island, and grocery stores. She was a mentor and an inspiration to all in her midst. Her love and giving was so immense, it extended across the ocean to her family in England, Canada and community in Jamaica. A fashionista, Joyce enjoyed the finer things in life; traveling, wearing the trendiest designer and custom made attire, shopping on 5th Avenue, fine minks, designer eyewear … and the list goes on. Having her home well-furnished with a baby grande piano, custom remodeling and designed by Clive Christian and Drexel Heritage, and cruising in style in luxury vehicles. She never showed up empty handed, whether it was a new outfit, a few dollars or fruit, she always had something to give her loved ones. Her family was her joy. Early on she spent the holidays traveling the Caribbean with her children, their friends and even a foreign exchange student from Paris. She was spontaneous and always enjoyed life. Whether it was a late night tea party, heading to a boat ride, hitting the local casinos or just talking for hours on the phone. Wherever she was there was always good vibes, and you always left the conversation with more than you when you started. She knew how to make the saddest person laugh - she was also so funny, making up new words and nick names (e.g. Penny and Lolita), dances and soliloquies to bring joy to all around her. Joyce epitomized the Proverbs 31 Virtuous Woman: a driven business woman, a devoted wife, a loving mother, a committed friend, a reliable confidante, a miracle survivor, a heartfelt giver, a fashionista, and a gift to all that she encountered. Her light will be sorely missed by her family and friends. Joyce, as much as we love and miss you, we know you are with your heavenly Father and are better now that ever before! We love you. Psalm 23 The LORD is my shepherd; I shall not want. 2 He maketh me to lie down in green pastures: he leadeth me beside the still waters. 3 He restoreth my soul: he leadeth me in the paths of righteousness for his name's sake. 4 Yea, though I walk through the valley of the shadow of death, I will fear no evil: for thou art with me; thy rod and thy staff they comfort me. 5 Thou preparest a table before me in the presence of mine enemies: thou anointest my head with oil; my cup runneth over. 6 Surely goodness and mercy shall follow me all the days of my life: and I will dwell in the house of the LORD for ever. Joyce Palmer leaves the legacy of her love, giving spirit, style and laughter: Her Devoted Husband: Alvin Palmer, Sr (preceded in death) Her Loving Children: Marlon Elliott (preceded in death), Myrna Elliot-Brown, Clive “Dexter” Palmer (preceded in death), Ernest Palmer, Desrene Smith, Norman Dwayne Palmer, Claudeen Palmer, Alvin Palmer, Angela Palmer. Her Devoted Siblings: Sister P, Enid Jones, Marjorie “Kitty” Robertson, Geraldine “Dolly” Kirkwood, Gloria “Geta”, Clifford “Son” Davis (preceded in death), Jack Davis (preceded in death), and Beverly Smith Her Devoted In-Laws: Karen Palmer, Marcia “Bud” Palmer, Donald Smith, Lawrence Brown, and countless beloved nieces and nephews. Thirty-two Grandchildren: Tamara, Nadine, Natifa, Nicole, Keon, Kevin, Hakeem, Simone, Nicole, Kasheik , Kasheiba, Kimika, Kasheika, Kashauna, Kashaun, Kaneik, Shuana, Shovanna “Brandy”, Sherina Shelby, Matthew, Sherika, Colby, Destiny, Sheneice, Reese, Kendall, Raven, Tashaun, Tasheim, Taquan, Tanasia. Great Grandchildren: Reese, Ryan, Ariana, Nariah, Keyasia, Keon Jr., Abigail, Adam, Lauryn, “Lolita” Phoebe, Logan, Andrew, Liam, Khaiden, Khairo, Khaleb, King, Kingsley, Kruz, Jordan, Sage, Jade, Ella Jade, Nariah, Nailah, Noah, Josiah, Melissa, and countless others. Her Goddaughter: Nakeshia Farnum, Natasha Atkinson Host of nieces, nephews, cousins, in-laws, and countless friends, associates and neighbors.