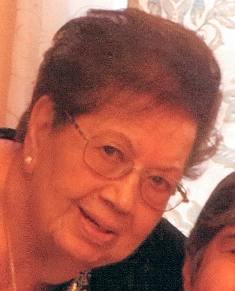 Katherine (Paissides) Zeibekis was born on December 16, 1929 in Pyrgos, Limassol in Cyprus to George & Chrysi Paissides. She had three older siblings: Maria, Anna, and Costas. Her father immigrated to the United States just months after she was born. She was one of the fortunate females in the village who received a formal education and was very gifted. Kathy also earned the informal title as the fastest runner in their village!

The family was eventually reunited in Paterson, New Jersey in 1947. Kathy attended “night school” with her siblings and learned to read, write and speak the English language.

Five years later, Kathy’s mom gave birth to her sister, Dora, so Kathy became an older sister at age 23! Kathy also reunited with Andreas, who had his eyes on her since their childhood years. They became engaged and married in 1954.  Kathy and Andreas gave birth to two beautiful girls, Anna and Georgia. When Georgia was almost 2 years old, she had undergone a medical procedure to remove a lower spinal tumor that left her non-verbal and with a cognitive disability. At the age of 8, her parents made the very difficult decision to move Georgia to a residential facility for children with special needs where she lived her entire life. Kathy, Andy, Anna and family would visit Georgia on a weekly basis. In fact, Kathy was motivated to attain her driver’s license in order to visit Georgia more frequently.

Kathy was a home maker and worked for several years in factories and at her sister’s restaurant. Kathy was an excellent cook.

Having lived a life with a child who had significant special needs, she could easily have grown bitter and angry in life. But, instead, Kathy was most loving, compassionate, accepting and forgiving of all people. She was a gentle loving person with a giant heart. She always gave and expected nothing in return.

Kathy and her husband moved to Nesconset, Long Island to live with her daughter, Anna, and son-in-law, Alex, who had married. Kathy was blessed with two beautiful and wonderful grandchildren, Pamela and Andreas. She really enjoyed living in Long Island with her immediate family. When Pamela married Alex, they, too, blessed Kathy with two beautiful and amazing great granddaughters, Cemelia and Anna. Kathy was also blessed to see her grandson Andy marry Cristina.

At almost 80 years old, Kathy became a Golden Girl and moved to Miami to enjoy spending time with her granddaughter, Pamela, Alex, and her two great granddaughters. It was first time she had flown in an airplane.

Kathy was always most proud of her family. Her daughter, Anna, became her primary caretaker as her health declined… ensuring Kathy’s comfort until her passing.

As a final comment to convey her convictions, she would recite the  Greek Orthodox liturgical prayers as a young child until her last breath. She will be so deeply missed.

Donations in Kathy’s memory may be made to St. John’s Greek Orthodox Church in Blue Point, New York.