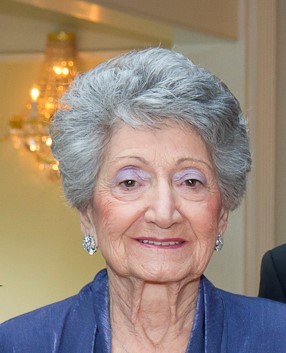 Marie Bombara Levantino, of Massapequa, N.Y., died on April 12, 2020 at the age of 97. The daughter of Carmelo and Adelina Bombara, Marie was born in Brooklyn, NY on April 3, 1923, and grew up there with two brothers, John and Peter. She graduated from New Utrecht High School at age 16 and went on to study Italian, French and Spanish at Brooklyn College, where she also met her husband-to-be, Barney Levantino. They married in 1946. She worked at Bendix Corporation, and then took time off to care for her three sons, Joseph, Carl and Barney. After returning to work, she handled international communications for an import/export company. Marie was happiest when she was surrounded by her family. Her favorite activity was baking cookies, cakes and pastries. Holidays were special to her, and she was famous for getting up at dawn to put the Thanksgiving turkey in the oven. Christmas dinner was always a labor of love and a feast of Italian specialties. When her grandchildren walked in the house, the first thing she asked is if they were hungry. Marie is survived by her son Joseph and his wife, Susan, her son, Barney and his wife, Linda, her grandchildren Michael and his wife, Amanda, James, Gregory, Christine and Angela and Linda’s children Joseph and Kristina; her nephew Carl and his wife, Constance, and niece Maryann Bombara.