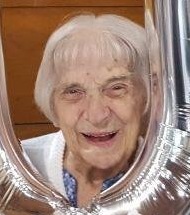 Olive Elizabeth Sachman (nee Engle) passed away peacefully in her home on September 30 in Hauppauge, NY, at the age of 101.Olive is survived by her husband, Stephen Sachman; her children, Gordon (Patricia) Woodruff of Melbourne Beach, FL, and Janet Snape of West Chester, PA; four grandchildren, two step-grandchildren, seven great-grandchildren, and a very dear neighbor, Dawn Warren. She is preceded in death by her parents Frank Peter and Anna Katherine Engle, her siblings Kathryn, Florence, and Frank, her first husband, Richard Woodruff, her stepson Stephen 'Stevie' Jr., and her son-in-law, Thomas Snape. Olive Elizabeth Engle was born on September 18, 1916 in Carlstadt, Bergen County, NJ, to Frank Peter and Anna Katherine (nee Baumann) Engle. She grew up on a farm and boarding house near Middletown, NY. She attended a one-room schoolhouse and graduated from Middletown High School. She married her high school sweetheart, Dick Woodruff, on September 18, 1937, Olive's 21st birthday (proof of Olive's spunk since her parents forbade her from marrying before age 21). After marrying, Olive and Dick moved to Amityville where the couple welcomed two children, Gordon and Janet. Her children remember her as a determined mother who encouraged them to pursue their goals. Olive was widowed in 1970. Olive enjoyed ballroom dancing, where she met Steve Sachman. They married in 1972, moved to Hauppauge, and enjoyed forty-five wonderful years together. One of their favorite pastimes as a couple was visiting Atlantic City on a nearly weekly basis for much of their retirement.Olive was a woman of many talents. In addition to knitting, she made several beautiful afghans for loved ones. She played the organ and had a lovely singing voice. Olive was a Girl Scout leader for many years, and she was actively involved in the Massapequa Fire Department Woman's Group. Also active in two bridge groups, Olive was a witty and vivacious individual who loved playing cards and games with family and friends. She was passionate about making friends with anyone she came across, and her frequent words of wisdom, particularly to married couples, was, 'Take care of each other.' Winsome and funny, Olive loved a good joke, and even just a few years ago could be found down on the floor playing and laughing with great-grandchildren. Olive fostered a great love of animals; not only did she have a tender heart for dogs and cats, but she also kept the squirrels, chipmunks, and birds in her backyard exceedingly well fed. During Olive's early years on Long Island, she worshipped at St. Paul's Lutheran Church in Amityville where she filled the role of choir mother, taking care of the robes. In recent years, she was an active and dedicated member of St. Andrew's Lutheran Church in Smithtown, having previously attended St. Paul's Lutheran Church in East Northport for much of the later part of her life. A funeral is scheduled for 2:00 pm on Saturday, October 7 at St. Andrew's Lutheran Church in Smithtown. Pastor Justin Kosec will officiate the ceremony. All are welcome to attend and celebrate Olive's life. In lieu of flowers, please send donations to the Suffolk County SPCA at P.O. Box 6100, Hauppauge, NY, 11788. Condolences can be sent to 255 W. Boot Rd, West Chester PA 19380 The family would like to express their gratitude to Emelda and Faith for their care of Olive these last several weeks.