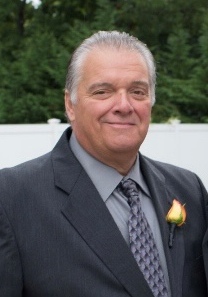 The family requests that all visitors attending the memorial visting to please wear a mask at all times.

Pasquale Gallo was born in Florence, Italy, raised in Astoria Queens and moved out to Rocky Point after spending many summers as a child with his family in the quaint north shore town. He was a proud member of Rocky Point High School’s first graduating class receiving his diploma in 1975. Dedicated to the community in which he grew-up in, he raised his children Nicholas, Michael and Lisa Marie in Rocky Point with their mother Joan and passed along his passion for food, sports and family.

Pat had a flare for the culinary arts, his stove always simmering with a pot of sauce and his table filled with the people he loved. An accomplished athlete, Pat received an invitation by the New York Mets to attend tryout camp and is immortalized in the halls of Rocky Point High School in their athletic hall of fame along with his sons Nicholas and Michael. He was an avid sports fan, cheering and jeering at his favorite teams – the Rangers, Jets, Yankees, and Italy’s national soccer squad.

Pat passed his love of athletics onto his children and grandchildren, serving as their coach, mentor and biggest fan. He found peace in life’s simple joys – fishing on an old pier, sitting quietly on the beach’s shore, jamming to classic tunes, attending concerts, traveling the country and always in the works of his personal hero, Elvis. North Carolina was a second home for Pat, he lived there for a time and enjoyed it immensely with plans to return there with the love of his life Diana, his wife, best friend, caretaker and rock. A charismatic man and life of the party, he attracted people with his humor and warm personality. Equipped with the gift of gab he knew how to use it. This blend of personality traits made him the perfect bartender, car salesman and security guard.

Pat loved his children, step children and son and daughter in laws deeply and absolutely adored his grandchildren. They all brought him so much joy with their laughter, smiles, stories and hugs, these which inspired him to fight when illness brought pain. He was so special to everyone and a man of many names…Pasquale, Pat, Patty, P. Diddy, Squalies. Best of all he was Nonno, Papa Squals and Papoo to all of his beautiful grandchildren! He was the most loving, caring and fun grandfather who left a mark on each of their little hearts, the memories will live forever. His faith and trust in God got him through tough years and gave him strength through illness. It was time for God to call him home, no more suffering, no more pain. He’s our angel now. Rest peacefully, we love you.