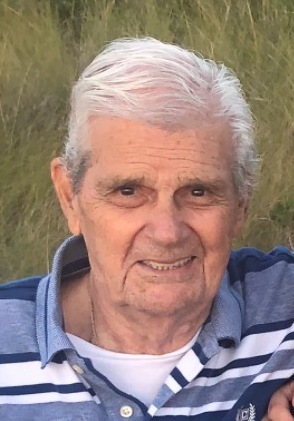 Bob Gambardella grew up in Hell’s Kitchen during the 30s and 40s with his sister Joanie and his brother Richard. He proudly served his country in The U.S. Navy during the  Korean War, where he was stationed in French Morocco. In 1958, he married the love of his life, JoAnn Viccora, and the two moved “way out east” to Commack where they raised 3 children – MaryAnne, Rob, and AnnMarie. Bob worked a variety of jobs throughout his life; he was a tech writer at Northrop Grumman where he worked on the Lunar Module that accompanied the Apollo 11 Moon Shot and the A6A Intruder Fighter Jet. He also did a stint in catering which gave him many entertaining stories to tell to his children and grandchildren, worked as a plant manager at UL for many years, and was most recently a well-loved security guard in the Kings Park School District. He also volunteered at St. Joseph’s Home for the Aged in Elwood, where he befriended many of the Sisters of St. Benedict.

Bob was a beloved husband, father, brother, uncle, grandfather, great-grandfather, and friend. His children loved him for his good humor and strong familial leadership, and his grandchildren look back fondly on memories of swimming in the pool with him and building sandcastles at the beach. They will never forget looking up in the stands at their sporting events to see his smiling face proudly cheering them on. He loved going out to the movies, swimming in the ocean, walking for miles on the Sunken Meadow Boardwalk, and singing along to Frankie Valli and the Four Seasons. Bob was a true family man. He will be sorely missed by everyone who was blessed enough to cross paths with him, but “what is grief, if not love persevering?”

In lieu of flowers, please send donations in his memory to St. Jude Children’s Hospital.

The family greatly appreciates donations made to these charities in Robert M. Gambardella 's name.