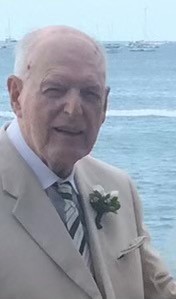 Funeral Service will be live at 9:30am Friday

Thomas Arthur Flaherty, 87 of Ridge, New York died on Friday January 15, 2021 from Parkinson’s disease. He was born November 10, 1933 in New York City, son of the late Thomas F. Flaherty and Agnes Flaherty (nee McMahon). He was preceded in death by brothers Vincent and Brian. He is survived by his loving wife of 66 years, Catherine Flaherty (nee Slattery), his sisters Gail Cornacchia, Sr. Arlene Flaherty O.P. and brother Dennis. He is also survived by his nine children and thirteen grandchildren, two great grandchildren, and one on the way.
Thomas was a graduate of Cardinal Hayes High school where he was a pole vaulter, cross country track star and part of a relay team that held the American High school record for the four by one mile relay. He ran in the Penn relays in Philadelphia.
He served in the U.S. army for two years during the Korean War. He was honorably discharged in June 1954.
He graduated from Fordham University for both his undergraduate and his Master’s degree. He worked his entire 38 year professional career for The New York Life Insurance Company, advancing from clerk typist to Underwriter and earning his Chartered Life Underwriters Certification. He was promoted to Treasury, and eventually to Executive Vice President and Head of the Bond Trading Desk retiring in 1988.
Thomas was a devoted Catholic. He helped fund and lead the building of Our Lady of Lourdes Catholic church, school, rectory and convent as finance director of the Parrish Counsel. He was a regular Mass lector, Holy Name Society Member and was awarded the Confraternity Christian Doctrine Medal for his decades of work teaching and then leading the education of public school attending
Catholic children at Our Lady of Lourdes Parrish. This was the accomplishment he was most proud of. Additionally, he started and coached the Catholic Youth Organization track team for O.L.L. to great success. He later went on to coach a championship little league team, and the “Big Red” Massapequa Athletic Club soccer team.
He did absolutely everyone’s Taxes. He loved numbers, he loved poker and made the final table of every tournament he ever participated in. He played bridge on the Long Island rail road on his way to work.
Tom had an outgoing personality with boundless energy which he harnessed at work and around family and friends. He was the consummate practitioner of the teachings of Jesus Christ and his leadership and service to others was a powerful force for good. He was a loving and dedicated husband to his first and only love of his life Kate.
He loved to run, compete, and achieve. He loved to sail, he loved to dance his shoes off! He loved to invest, make money, and follow the financial markets. He loved all things Italian, but especially the food!He loved to sing the music of Nat King Cole and knew every lyric of every song. He was crazy about babies, birthdays, and loved to organize parties especially for his birthday and anniversary.
He loved the New York Football Giants. He was the world’s luckiest fisherman.
Services will be private. Memorial Contributions can be made to the Micheal J. Fox Foundation for Parkinson’s Research.